Gastric sleeve resection is a procedure where weight-loss is achieved by reducing the size of the stomach considerably. The patient will therefore get a sense of full stomach with only a small amount of food eaten. The size of the stomach is reduced by 60-80%. It is a procedure where the direction of food movement is not changed and therefore the risk of ulcers, vitamin malabsorption and constipation is reduced.

We have a Specialist Bariatric Nurse Judith Jobling in the United Kingdom calling our patients regularly in the first month after surgery to monitor their recovery. Judith gives professional support and advice to each patient and since she has had bariatric surgery herself, she can be of true help and counsel.

What is gastric sleeve?

The gastric sleeve procedure (also called sleeve gastrectomy, vertical gastrectomy, vertical sleeve gastrectomy etc.) was originally designed as the first stage of a two-stage procedure, with the intention to bring patients back to the operating room at a later date and perform an intestinal bypass to complete the second stage of the procedure. However, it was found that the patients who had undergone just the “sleeve” portion of the two-stage procedure lost a substantial amount of weight without the need for the second part of the planned operation.

Several weight loss centres in the world began performing this operation, the gastric sleeve, as a permanent weight loss procedure and, after modifying the original procedure they had performed, are now showing an even better weight loss than there was with the initial surgery.

The gastric sleeve causes weight loss through much the same mechanism as the two other well-known weight loss procedures used commonly by restricting the amount of food that a person can eat  before becoming “full.”By removing approximately 80% of the stomach, this procedure is a purely restrictive procedure.

There is no bypass involved and therefore essentially no risk of malnutrition. The sleeve is performed using minimally invasive techniques and is an excellent alternative to the other well established laparoscopic gastric bypass and the laparoscopic gastric band. It can be used in any patient that qualifies for bariatric surgery and also for selected patients with a smaller amount of weight to lose who are not candidates for a gastric bypass.

“From the beginning of my search for a surgeon for my gastric sleeve resection I was drawn to the Health Clinic in Estonia. Very professional from start to finish. Dr Rein Adamson is an excellent …”

How does gastric sleeve work? 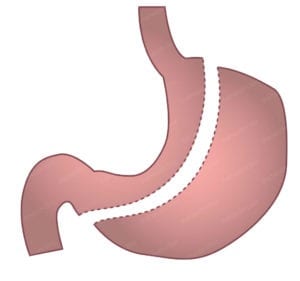 This procedure generates weight loss solely through gastric restriction (reduced stomach volume) and earlier satiety (feeling full with smaller amounts of food). The stomach is made smaller by dividing it vertically and removing approximately 60 to 80%.

The procedure is not reversible. The remaining stomach is shaped like a narrow banana and is filled with approximately 100 grams of food. The goal is to preserve the function of the stomach while drastically reducing the volume.

In comparing the gastric sleeve to the Roux-en-Y gastric bypass, the gastric bypass will have a similar feeling of restriction but will also include dumping, which means an upset stomach after eating sweets or concentrated carbohydrates; the sleeve does not cause dumping.

Also, the Roux-en-Y gastric bypass can be reversed if necessary. In comparing the gastric band to the gastric sleeve, the gastric band involves using a device made of a plastic polymer to cause the feeling of restriction whereas there is no artificial device implanted with the sleeve procedure.

An important fact to remember is that there is no intestinal bypass with this procedure which avoids the potential long term complications such as marginal ulcers, vitamin deficiencies caused by malabsorption and intestinal obstructions.

Finally, although patients report that some hunger and cravings can slowly return, an important study published in 2006 by Dr. Himpens from Belgium showed that even after three years the sensation of cravings is far less after sleeve gastrectomy than with the gastric band procedure and that many patients experienced a greater weight loss.

Short term results show that gastric sleeve patients who have had the stand-alone procedure can expect to achieve a 60 to 70% excess weight loss at 2 years. If weight loss is insufficient following gastric sleeve surgery, a malabsorptive weight loss procedure such as the duodenal switch may be performed in order to promote further weight loss.

Gastric sleeve surgery is considered for people who are obese, defined as having a BMI of 30 or higher with other serious health conditions taken into account that are associated with obesity.

The gastric sleeve procedure will restrict the amount of food that can be eaten at any one time, but it does not restrict any certain foods from the diet as the digestive system still functions normally. It is up to the patient to adopt the healthy diet and active lifestyle that will promote weight loss.

The capacity of the stomach has changed. Also the amount of food intake has to change. Nevertheless it is not always easy to stop eating at the right time. What do we mean, if we say small quantities? For example one slice of bread for breakfast or 2 potatoes and a small piece of fish for lunch.

You need more time for chewing and also not all food is possible to chew well. The list of ‘unsuitable food’ will show you the products which are usually not easy to chew.

Never eat and drink at the same time

The reduced capacity of the stomach will no longer permit to take in both: liquid and food at the same time. The usual amount of beverage, 2-3 litre liquid per day, are desirable. It´s better to drink between or before meals.

Do not lay down or rest after eating

Because in a horizontal position reflux is more likely. The food also remains longer in the prestomach and leads to a very uncomfortable accumulation of mucus.

This is important, because if you only eat 2-3 times a day, it is not possible to have a great variety of food. Consequently, as you can only eat small amounts, you do not get enough proteins, minerals and vitamins. In addition, when eating 5 times daily, it is less likely that you are overpowered by sudden hunger attacks where you probably forget the new eating habits.

Watch for beverages rich in calories

In our experience, many people take in a lot of their calories with soft drinks, hot chocolate and milk shakes. This is also possible after the operation, so consider this before drinking high calorie liquids. The type of liquid should be varied and include tea or coffee, diluted fruit- or vegetable juice, light drink with artificial sugar, low fat varieties of butter milk, non-carbonated mineral water.

Gallery with before / after pictures

The gastric sleeve surgery is performed by a specialist Dr. Rein Adamson or Dr. Martin Adamson, who are the leading bariatric team in Estonia. Ask for more information.

Look what is included in our unique and comprehensive package price