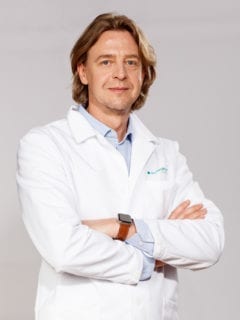 Dr. Simmo is a uniquely trained, highly sought-after top plastic surgeon with diverse skills. Among other things, he specialises in breast surgery and face, neck and eyelid corrections. Dr. Simmo is the only plastic surgeon in Estonia who has completed the joint specialisation programme of Nordic plastic surgeons, which involves taking a national speciality examination in Norway, Denmark, Sweden and Finland. As part of this programme, he has worked in Helsinki and Barcelona University Hospitals.

He is one of the few internationally licensed female genital plastic surgery specialists in Estonia. Dr. Simmo regularly expands his knowledge by attending various training events all over the world, operating on different body areas with top specialists in his field. Aside from The Health Clinic, he works at Helsinki University Hospital as the chief doctor of his department.

In Estonia, he has a very important role in the field of breast cancer surgery. Namely, he was the first in Estonia to perform immediate breast restoration surgeries on cancer patients and develop oncoplastic surgeries.